XWI™ is an industry-leading Full Waveform Inversion (FWI) algorithm for earth model building from raw seismic field data without dependence on low frequencies. It is also the first to be made available with virtually limitless computational power on Amazon Web Services (AWS).

It can be applied flexibly to any appropriate user-uploaded raw dataset, using any number of shots, with any number of iterations and with a variety of bespoke optimisation cost function parameterisations.

This provides clearer and deeper seismic images in challenging marine settings where conventional imaging is not good enough and leads to billions of dollars wasted on unsuccessful wells.

At its core XWITM consists of a non-linear optimisation toolbox for matching predictions to observations in an iterative feedback loop. It can make seismic imaging:

SCALABLE - runs on the cloud without MPI

Majority of the computational workload inside Full Waveform Inversion is performed by a finite-difference based wavefield simulation engine. This computes the forward and backpropagated wavefields needed for repeated simulation and cost function minimisation. This leverages the latest ARM-based c6g Graviton2 processors for which S-Cube were a selected launch partner. This enhanced FWI engine, with advanced capabilities such as structural-smoothing, is known as X-Wave.

X-Wave is designed to scale to thousands of square kilometres and parallelise over hundreds of thousands of shots without computational constraint. This is made possible through a communication protocol which is robust against interruptions.

When running on the cloud, a dynamic pool of interruptible EC2 Spot instance types is provisioned per individual job with GPU's on demand for acceleration of total-variation based gradient conditioning.

Local inversion can be nested within a derivative-free QPSO outer search loop for navigating the misfit landscape, suppressing cross-talk using semi-global multi-parameter inversion (anisotropy, attenuation, elasticity). Multiple Spot Fleets are run simultaneously and as a result, a job which would take several weeks with traditional HPC on a typical on-premises system, can be completed in days on the cloud.

An API-based multi-job submission (MJS) system has been created to support hyperparameter tuning. This is able to fix key unknowns without having to guess values and run blind. An example for fine-tuning accuracy by solving for critical water-bottom parameters is given here. 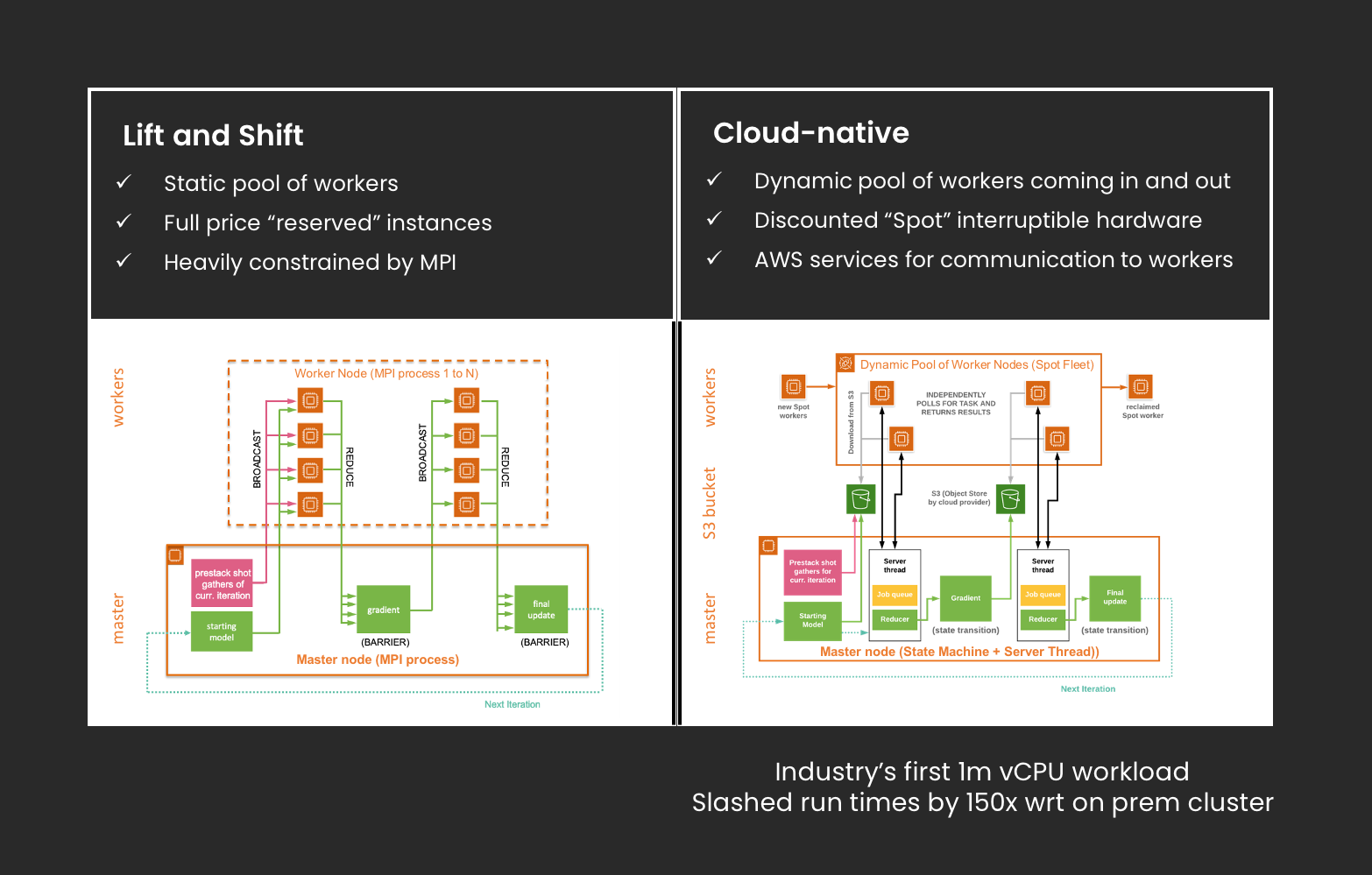 Use XWITM on AWS to discover a step change in accuracy and resolution of your velocity model.