The Chevron-operated Jansz field, discovered in 2000 with the Jansz-1 well, is situated at a distance of 250 km off the coast of North West Australia. The water depths over the target range between 1.1-1.4 km with lowest known gas in the field at 2970 mSS TVD at the Io-2 well. The closure of the Upper Jurassic age gas-filled trap has an aerial extent of more than 2000 km2 and a thickness of up to 65 m.

The RWI + AWI proof-of-concept is performed on a section of a narrow-azimuth towed-streamer (NATS) seismic survey dataset acquired in 2004. 9 sailline lines consisting of 5186 shots minimally processed are fed in and as the inversion problem is solved to recover a highly-resolve fully-quantitative characterisation of the subsurface.

This is the velocity model obtained from frequencies up to 20 Hz following application of RWI, AWI and FWI. Velocity extractions from the model at the well locations highlight the significant movement that occurs between start (dashed line) and final (continuous line) results in particular a high then low-velocity layer defining a cemented package hard interface at the Base Cretaceous Unconformity (BCU) overlying the high-porosity interval of the field.

Model validation: PSDM before and after XWITM

Pre-stack depth-migrated reflectivity is generated to QC the velocity update. The starting model stack has a clear pull-up at the Cretaceous wedge due to the missing velocity heterogeneity in the overburden section of this model.

The XWITM velocity update results in a downward shift of 120 m and 135 m at the wells (blue to green dashed line) and the continuous negative amplitude event tracked across the section defines the top of the low velocity porous layer. 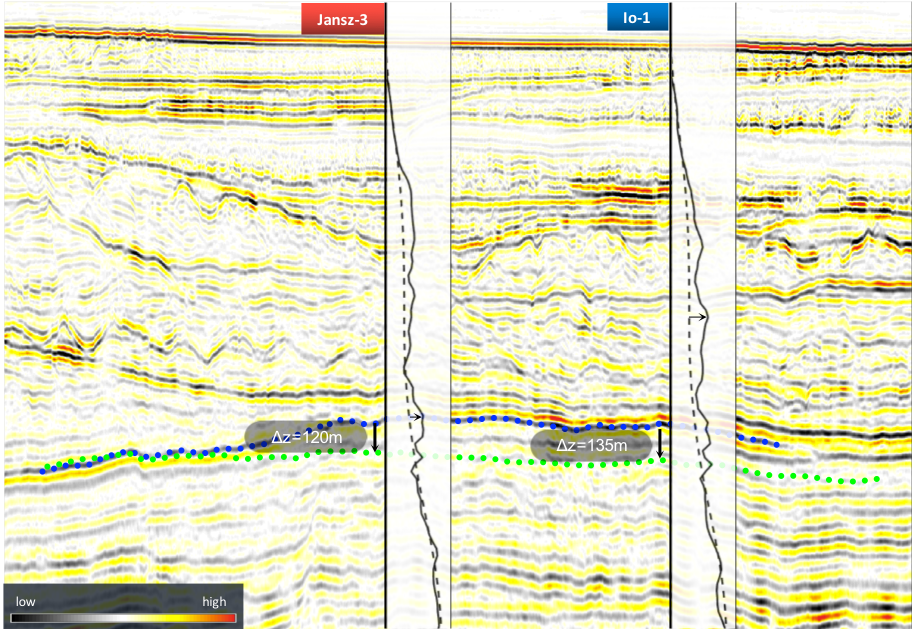 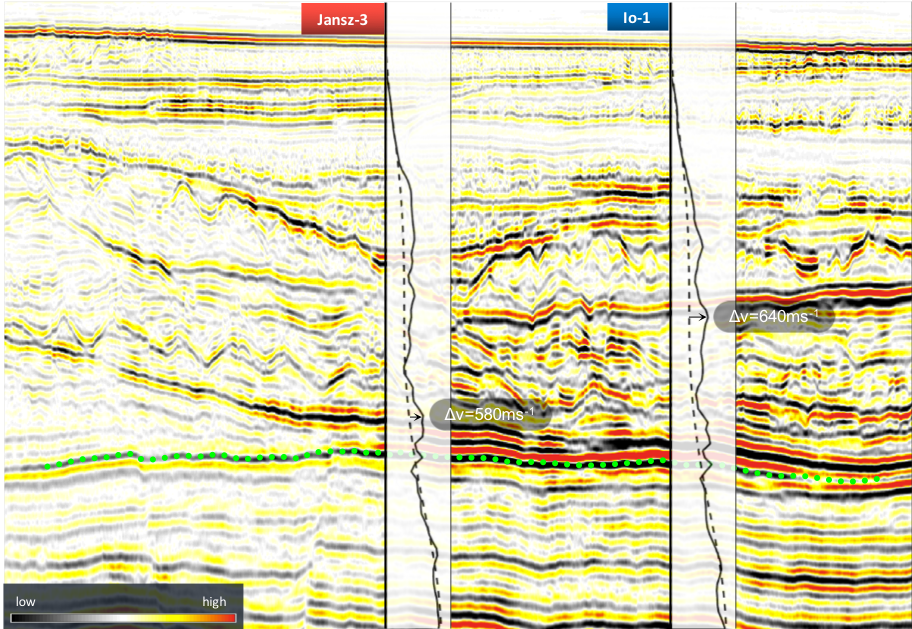 The survey is a narrow-azimuth marine streamer acquisition with 8 receiver cables of length 5.5 km. There are 5186 shots in total with 20% utilised per iterations.

The raw shot gathers that are input into the process have all free-surface effects retained. No pre-processing is applied to the traces beyond bandpass filtering for progressively widening the frequency range through blocks of iterations.

With the limited cable length, the model updates need to penetrate below the reach of the diving waves for broadband velocity recovery at the target zone. 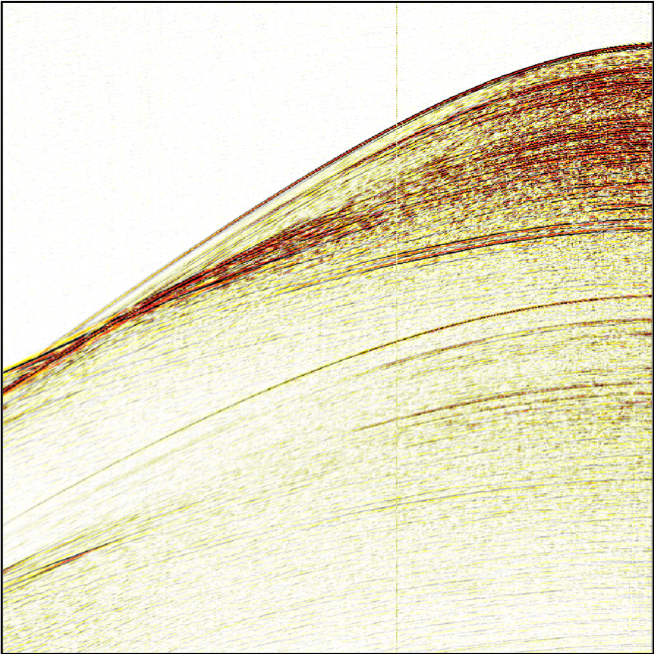 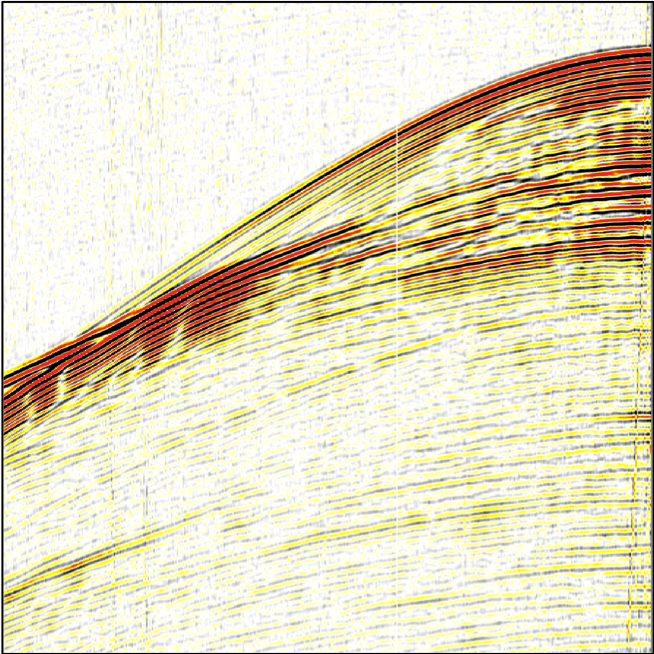 The panels show 6 stages of the inversion - predicted traces (left) and field recordings they are being matched against (right). The field recordings are being fed in at widening bandwidths with the lowest frequencies having lowest signal to noise. The initial match is very poor and the trace fit accuracy increases as the iterations proceed and bandwidth is widened, resulting in a convergence between the prediction and field recorded traces. 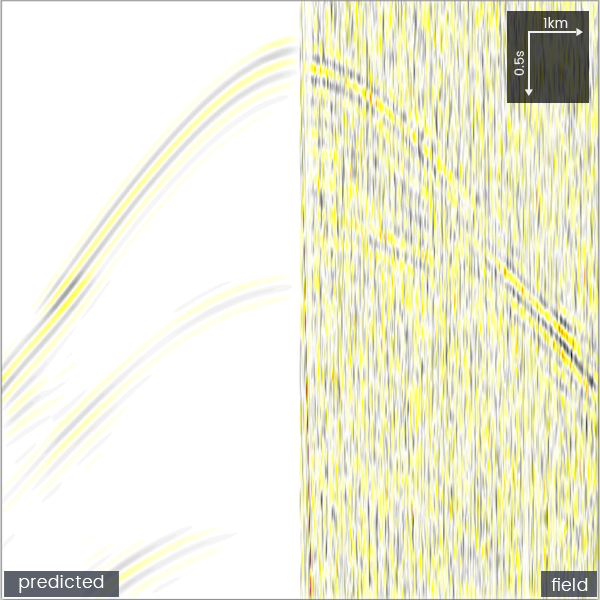 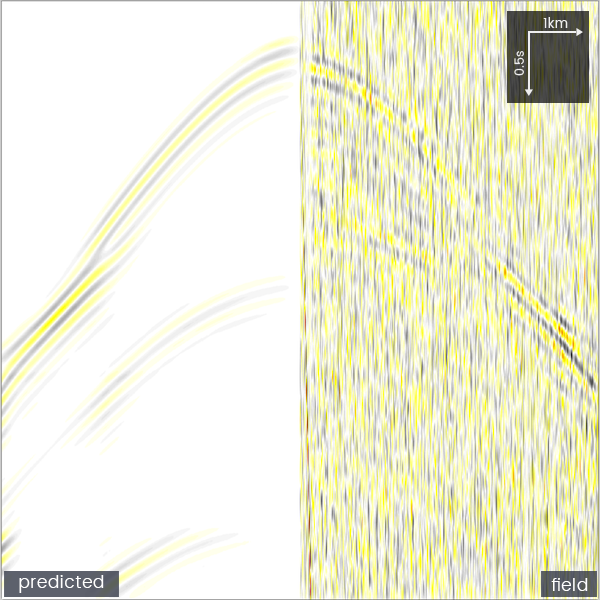 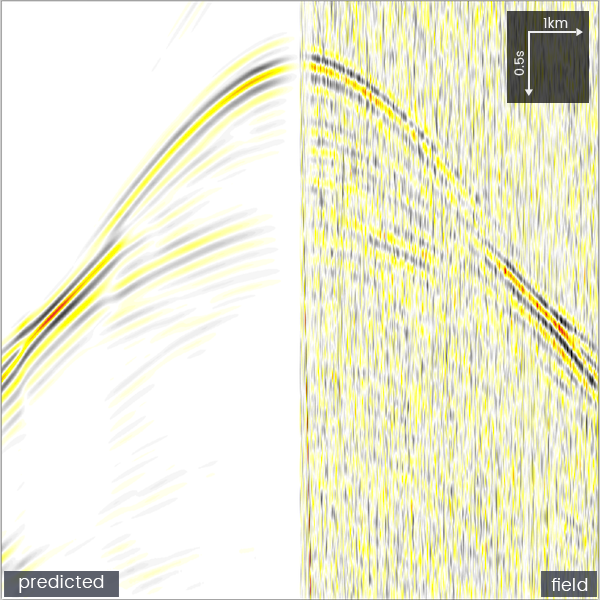 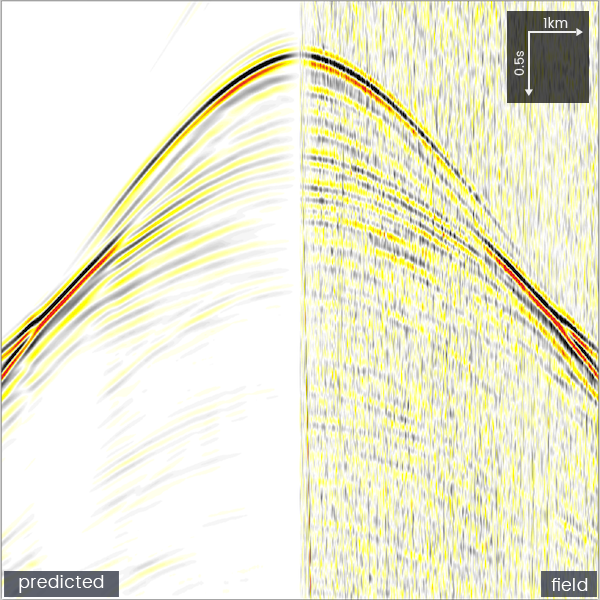 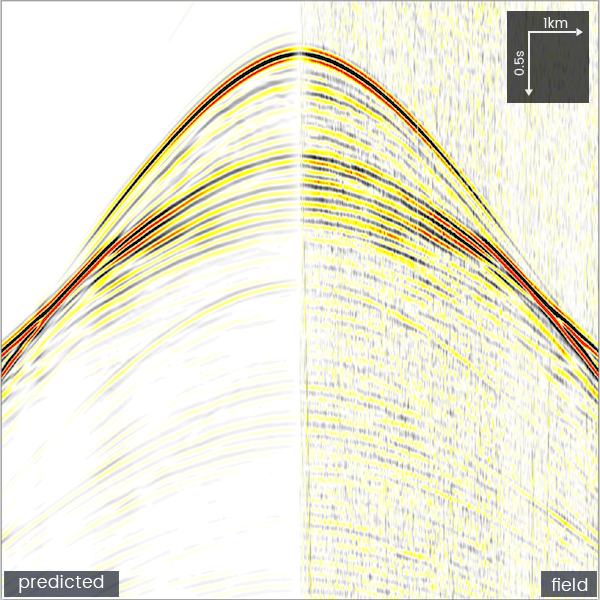 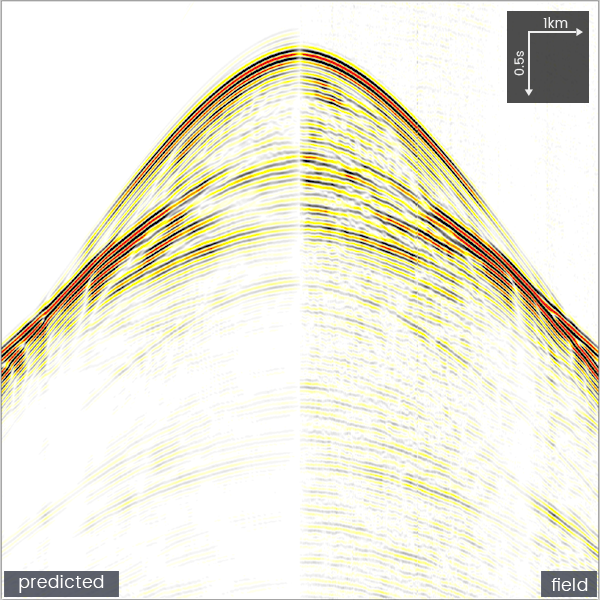 Regardless of the initialisation, the background model is updated towards the basin of attraction of the desired loss function minimiser when driving the inversion with RWI and AWI. Velocity values at borehole location are shown in red and compared to the sonic log showing how far the velocity shifts as the inversion proceeds. The entire chain is performed with zero human intervention and the data remains on the cloud throughout.

Switching off RWI and AWI, keeping everything else the same, running XWI in basic FWI mode, a spurious result is obtained. At a depth of 2.2 km, the velocity shift is in the wrong direction away from ground truth due to the effect known as cycle-skipping.

The result demonstrates the importance of the core algorithm. With RWI and AWI, the target layer can be targeted with precision. Without RWI and AWI, a misrepresentation of the subsurface is obtained with an erroneous low velocity band seen to cut across model. 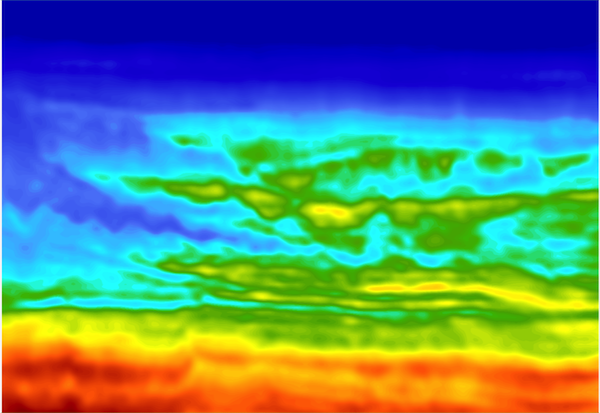 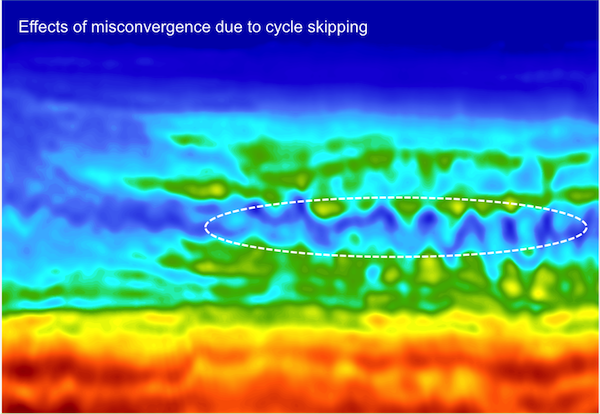